The Saint Katherine Greek Orthodox Church community of Elk Grove, California, welcomes you to its house of worship.

In 1988, a small group of Orthodox Christians dedicated itself to the task of organizing a parish to serve the religious needs of Orthodox faithful in the Sacramento Valley. Services were first held on August 7th, 1988, in a rented hall. In April of 1989, the congregation moved to a warehouse located on Dino Drive in Elk Grove, which the members converted into a church/chapel. The decision to take Saint Katherine as our patron saint was made through a program in 1989 when the parishioners all voted for the Saint's name they preferred for our new parish. Soon after, the community approved architectural plans for a new church and on September 26, 1993, ground-breaking ceremonies were held at the current church site in the Laguna West neighborhood. Construction was completed in October of 1995 and Metropolitan Gerasimos of San Francisco consecrated the church at a solemn ceremony, on May 21st, 2005. 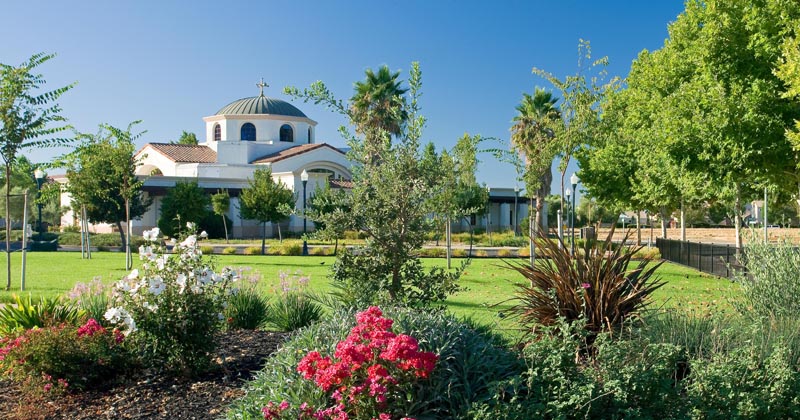 At Saint Katherine church in Elk Grove, California, we have been blessed with having the same Presiding Priest since our founding in 1988. Originally from Illinois, Reverend Father Constantine “Dino” Pappademos was ordained to the Holy Priesthood in June of 1985. He and his wife, Presvytera Chrisoula, are founding members of our parish, and we have had the privilege to see them raise their three lovely children into adulthood over the years.

Through the decades, Father Pappademos has overseen the construction of our church building and our hall, and the continuing growth of our Parish. He has also served as Chaplain to the State Assembly, and in many other roles in the Orthodox Christian community. We are thankful for his leadership, commitment, and service.

For the next 1,000 years of Christian history, there was only one Christianity -- one Christian Church. It was in the eleventh century that a disastrous split occurred which resulted in the Western Church, under the Pope of Rome, separating itself from the established Orthodox Church. The papacy sought to assert itself as the supreme leader over all of Christendom and finally succeeded in Western Europe. However, the rest of the Christian Church rejected this innovation, knowing no so-called "universal head" apart from Jesus Christ, the Son of God.

In the United States, Orthodoxy was espoused by the scores of immigrant Christians who arrived from Greece, Russia and many Balkan countries, and who brought their native faith with them. The first Orthodox parish in this country was established in the town of New Smyrna, Florida in 1768. In addition, in 1794 Russian missionaries established a mission on Kodiak Island off the coast of Alaska. It was not until the early 20th century, however, that substantial immigration took place and the Orthodox Church began to grow in America.

The Orthodox Church, which numbers over 250 million members worldwide, does not restrict membership to people of any culture, race class or section of the world. In fact, the diversity of cultures, peoples and language has long characterized the Church's history, since Orthodoxy embraces all people.

Today, there are over one million Orthodox Christians in the United States, served by more than 1,600 Orthodox parishes, five theological seminaries and over a dozen monasteries. New parishes and churches, reflecting the increased awareness of Orthodoxy in American culture, have been built in many cities and suburbs recently, particularly in California, the South and the Southwest regions of the country. Church services at Saint Katherine, including the Sunday morning Divine Liturgy, are celebrated both in English and in Greek for the benefit of those versed in either language.

Saint Katherine, who lived in Alexandria, Egypt during the fourth century A.D., was from a noble family and of excellent learning. Our patron saint was the daughter of the ruler Constantus and she was said to have been very beautiful, statuesque, and unequaled in kindness. She refused all proposals of marriage saying that the man she married must be young and equal to her in the four virtues: compassion, wealth, wisdom and beauty.

Katherine's mother, being concerned, went with her daughter to seek the advice of a saintly hermit. After listening to the girl's story, he said, "I know of a magnificent man who surpasses you in all ways." Wanting to meet this man, Katherine asked who his mother was. The hermit gave her an icon of the Virgin Mary and told her to pray to the icon through the night adding, "If you are worthy of Him and if you approach Him in faith, His mother will allow you to see Him."

That night, the Virgin and Christ appeared to her and the Lord placed a beautiful golden ring on her finger, saying, "Today I make you my bride, and for ages to all ages. Hold this joining sacred and never take unto yourself another bridegroom."

Meantime, the Emperor Maxentius sent an edict throughout the empire that all should support his reign and worship his gods and turn from the popular Christian religion. Saint Katherine, of course, refused. Maxentius tried to persuade her to abandon her faith with a tribunal consisting of 150 philosophers and eventually with imprisonment, but when all efforts failed, he sentenced her to a deadly torture known as "the wheel". Yet when Katherine was placed in the device with sharp blades, the wheels broke loose and killed many pagans. For this reason, the torturer's wheel has served as a symbol for Saint Katherine and is often depicted in icons of her.

Finally, the emperor ordered her to be beheaded. Her death occurred on November 25th around the year 305 and her body is said to have been lifted by heavenly angels and taken to Mount Sinai. A band of monks later discovered her body and built a monastery near the spot of discovery. The relics of Saint Katherine are to this day enshrined in the monastery of Saint Katherine on Mount Sinai.

The members of the 2021 Saint Katherine Parish Council are:

Please select "Sign Out" below if you are ready to end your current session.